Getting the Most from Tablet Weaving Draft Designer

As some readers may already know, Tablet Weaving Draft Designer (TDD for short) is a free, browser-based tablet weaving drafting tool, which you can also use offline if you already have it loaded on your device. It's a joint project by my husband, James, and I that we started back in 2015 as a way for me to draft out my tablet weaving ideas more easily. It's changed quite a bit in the intervening years, most significantly over the Christmas holidays of 2020, when James did a full rewrite of the code and we implemented some new features.

As part of the rewrite, the draft that TDD generates is now an SVG (scalable vector graphic) image meaning that you can highlight any of the numbers and letters on it with your cursor, should you so desire. We also added new collapsible menus for the Control Panel, as it was getting pretty big and cluttered. In this article, I will walk you through the different tools of TDD and what they do. 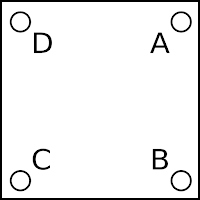 Before we get started, I want to define a few of the terms and assumptions that TDD uses. Tablets are labelled clockwise from A onwards (as shown above) and the drafts use a tablet starting position with A and whatever the letter of the final label is (this will vary based on the number of holes the tablet has) at the top. For four-holed tablets, it will generate a draft with quarter (90 degree) turns in the threading diagram; for two-holed tablets, it will generate a draft with half (180 degree) turns etc. 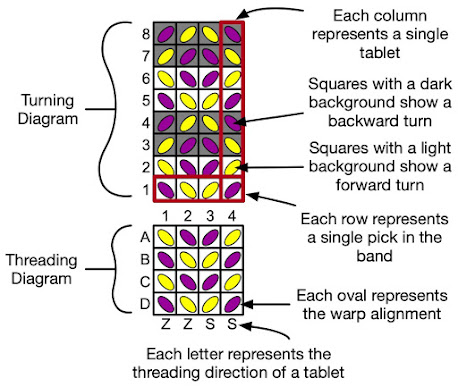 The TDD Control Panel has nine sections, but you don't have to use all of them to create your draft if you don't want to; the bare minimum you need is the Controls section at the top and the Palette section further down. Click on the name of each section or the plus symbol next to the name to expand that section of the Control Panel. Click on the name or the minus symbol next to the name to collapse it again.

Type the name of your draft in the empty box at the top of the Control Panel. This will be the name used for any files or images you save or export. If you leave this empty, TDD will use the file name "draft" instead.

TDD comes equipped with horizontal and vertical rulers, the position of which can be controlled by entering a value in the text box or by using the plus and minus buttons. The horizontal ruler is particularly helpful if you weave from your computer screen, as you can advance it up the page to help you keep track of your position in the turning diagram. I like to use the vertical ruler to mark the centre of the draft if it is a really wide one with a line of symmetry down the middle. You can also use the vertical ruler to mark the next tablet you need to thread in the threading diagram when you warp your loom. You can enter a minus number for the horizontal ruler position to make it appear in the threading diagram rather than the turning diagram. If you would prefer not to use the rulers, you can remove them by clicking to un-tick their boxes. I always do this before exporting the draft as an image file.

You can un-tick the Show Threads box to remove the thread ovals from the threading diagram. This is helpful if there's an error in your turning diagram that you can't pin down, as it lets you see the pattern of forward and backward turns more easily.

Tick the Show Threading Diagram box to include the threading diagram at the bottom of your draft. If you're generating a large number of drafts that all use the same threading, leaving it out after the first draft will save you some space on your page.

If you prefer to mark the points in the turning diagram where the turning direction of a tablet changes, rather than which tablets are turning backward or forward, tick the Show Reversals box to add a red line to the draft at these points.

The Show Text Description box will produce a set of written instructions equivalent to your draft, which will appear below it. The threading diagram is described tablet by tablet, with hexadecimal codes and names (more information about these names is given below) for each of the thread colours, with a list of turning instructions broken into groups of tablets below it. The description below is the text version of the example draft above:

The Backwards Turn Saturation slider can be used to increase or decrease the level of contrast of the grey background squares on the turning diagram. If you slide it all the way to the left, you can make the background of all the squares white instead to get a quick preview of what the draft might look like when woven.

When I'm creating a draft for weaving double-face, I un-tick the Show Threads tool and set the Backwards Turn Saturation to about 75%, as I'm using the draft to show the placement of the background colour and contrast colour rather than what the individual tablets are doing, but I still want to be able to see the borders of the boxes on the turning diagram. This charting method is also useful in producing drafts for brocaded bands.

Since the big December re-build, the Visual Scale of the draft can now be used to both increase the size of the draft on your screen and decrease it (if you input a negative number into the box), which is really helpful for getting an overview of very large drafts.

We initially took out this tool during the update, as we weren't happy with the way it was functioning. Now that it's back, it works a bit differently, but it's now no longer possible to use it to generate a band mock-up that won't work when woven.

Select the Show Repeats box and TDD will add a mock-up of your band to the right of your draft; it will look the the same as your draft, but all the squares will have white backgrounds and it will be missing any red lines or rulers. Specify which picks you want to be included in your mock-up using the Repeat Start and Repeat End fields and TDD will show you what a band would look like if you repeated that turning sequence using the threading diagram you have input. You can change how many times TDD repeats those picks using the Number of Repeats field. More information about how the Repeats tool works can be found here.

Treat the Reset All button with caution! It clears everything away and resets your draft to 1 pick high and 1 4-holed tablet wide at 0 Visual Scale. It's really helpful if you want to start a new draft from scratch, but there's no undo function, so always save your work before using it.

The Clear Pattern button will reset your turning diagram to the default, with every square set to forward turn, with no turning reversals, but won't change your threading diagram or the number of picks in it.

The Palette will display a Colour Name for the colour you have selected, taken from an open source java-script library by Chirag Mehta. This colour name is also used in the Text Description below the draft, if you have it turned on.

If the colours in the Palette aren't to your preference, you can adjust them by selecting a colour's box and changing it using the Red Green Blue sliders below it. Alternatively, you can enter the RGB values for the shade you want next to the sliders. If the colour you have changed is used in your draft, the draft will be automatically updated with your changes.

TDD can export images for both your draft and for your pattern repeat mock-up. Fill in the number of pixels wide you want the image to be in the box, then click on any of the three buttons below it to download your image. If, for example, you want your image to be 5cm (2 inches) wide with a resolution of 250dpi, enter 500px in the Export Width box.. TDD can export your draft as an .svg file, a .jpeg file or a .png file. The file name will be the same as the name you gave the draft at the top of the Control Panel. The image will be the same as your draft, so if you have the rulers or red reversal points turned on, they will be included in your exported image.

One of the big behind-the-scenes changes that we made this past December is the way TDD saves files. Previously, it used the .json format which produced a large amount of coded information, the vast majority of which would be gibberish to the lay-person. The new .tdd files are much shorter and actually resemble your draft if you open one up in a text editor (like Notepad++, Sublime Text, Emacs, Vi, Atom, or any programmers' editor); if you do open one, make sure that you don't accidentally change the file extension or TDD won't be able to open it again.

You will still be able to open any of the .json files you previously made using TDD, but you will only be able to save in the new format. We don't intend to remove this capability to open old files, so there's no rush to convert them.

When you click the Save button, TDD will download the .tdd file for your draft to your device using the draft name you specified at the top of the Control Panel, in the same way as the Image Export tool. Clicking the Choose File button will open an Open File dialogue box. The text below is the contents of the save file for the example draft above.

We will be continuing to add to TDD's features over time to support a wider range of drafting styles and I'll publish information about any changes on my blog as we make them. If you have any suggestions for new features, you can leave them at my blog or on Github, where you can also view TDD's code, but keep in mind that TDD is a project that we work on in our spare time, so it may take a while for them to be implemented. I hope this tutorial has been instructive and inspires you in creating your own drafts.
Posted by Catherine at February 15, 2021