I originally designed and wove this draft back in 2015 and shared in the Baelfyr (the Insulae Draconis SCA group newsletter), but it never made it as far as the blog. While the draft for this band is my own invention, the subject, Minions, belongs solely and completely to Universal Studios. 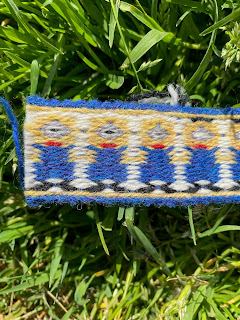 It was an interesting one to weave, as I was swapping out threads on the fly when they weren't giving me the effect I wanted. I cut the offending thread 5cm away from the edge of the band, pulled it out of its tablet, cut a new piece to length, tied it onto the back of the loom, threaded it through the tablet, then tied it on to the cut end of the old thread. The result was somewhat messy, but each thread swap got me closer to what I was hoping for. Unfortunately, I don't have much of the finished band, as it went to live with a friend. If I was to weave it again, I would use a white weft rather than a blue one, to avoid the little blue dots on the background between the Minions. 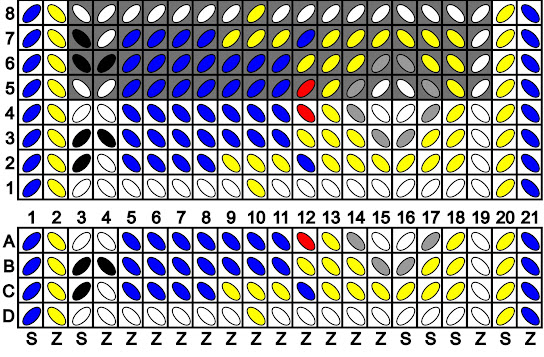 You can download the .tdd file for this draft by clicking here

To form the black eye dots, thread a needle with black yarn, the same as the one used in the warp, held doubled and make small running stitches across the diamond goggle section, carrying the thread behind the band between stitches.

As with all of the free drafts/patterns on this site, you are welcome to weave them, sell bands woven using them, and use them to teach other weavers, just as long as you state where you found them.

Posted by Catherine at May 05, 2022 2 comments:
Email ThisBlogThis!Share to TwitterShare to FacebookShare to Pinterest
Newer Posts Older Posts Home
Subscribe to: Posts (Atom)