I'm collecting my diary project videos into a playlist, which I'll be adding to as I go.

Posted by Catherine at November 13, 2021 No comments:
Email ThisBlogThis!Share to TwitterShare to FacebookShare to Pinterest

I'm embarking on a new band soon and I'm planning to document each step along the way with a short video. I'll be sharing the videos on YouTube and Instagram (I'm @tabletweaving over there) as well as here on my blog.

If you'd like to join me, the draft I will be using is the one below. It's a new botanical draft I just finished designing and I've named it Sweet Pea (my favourite flower). Interestingly, it uses motif lines in two different colours: green for the pea pods, leaves and stems and red for the flowers themselves. 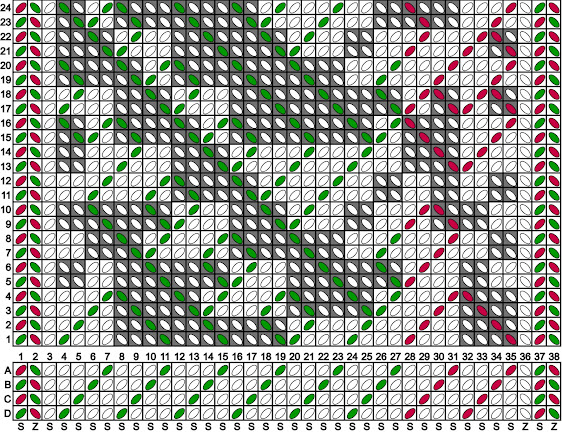 The text version of the draft is as follows:

The Drachenwald Arts Challenge AS 56: Nålbindning

I've wanted to learn nålbindning for a few years now, so when it was included in the Drachenwald Arts Challenge, I decided that now is as good a time as any. I get cold easily, so my goal was to make a pair of mittens and a pair of ankle warmers to wear at SCA events. It was a really interesting learning curve, as I learned to knit (but not purl, helpfully) and crochet before I started forming permanent memories, so I'm used to picking up yarn and it doing what I want without a lot of thinking. There was not a small amount of swearing before I got the hang of the hand movements required.

I'm using Nalbinding: What in the World is That? by Ulrike Claßen Büttner as my guide and working in the Oslo stitch, as it was the first on the list and appeared to be the simplest (I do plan to learn more stitches in the future). At first I started using some King Cole Merino Blend Chunky (discontinued) left over from knitting a sweater a few years ago and after multiple false starts, managed to come up with a starting chain that I was pleased with and had reasonably even tension.

Next, I went back to the book and worked my way through the section on joining in the round and producing a tube. After that, I worked out how to do increases and decreases through trial and error and started on my first mitten. Being a veteran knitter and crocheter definitely helped here, as I worked increases for the thumb gusset about where I would have done in either of those techniques. I was reasonably pleased with the result, although I completely under estimated the amount of yarn required and didn't have enough for a second mitten. I also learned that my yarn choice wasn't great, as the fabric I produced is pretty loose and I doubt it would stop even a gentle breeze.

Next, to work further on building up muscle memory, I decided to make my ankle warmers. This time, I was making just a simple straight tube, without increases or decreases, and it went pretty well. I think the hardest part was trying to make the two of them in roughly the same size. I used almost all of an undyed skein of West Yorkshire Spinners 100% Norwegian wool roving yarn held double. I received it a few years ago as part of a natural dyeing kit, but never used it as I don't like the way that singles yarns behave when knitted, so I was pleased to find a use for it. I was much happier with the fabric, especially with how dense and warm it is. 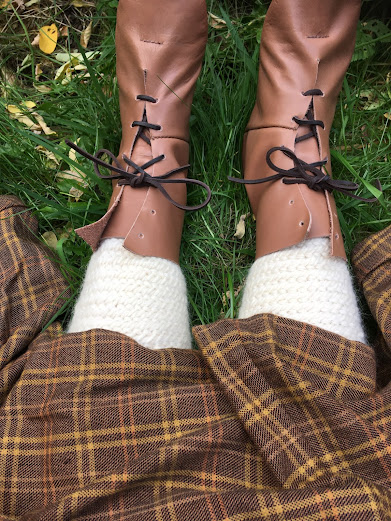 Having completed my ankle warmers, I turned my attention back to mittens. I dug around in my yarn stash and pulled out several balls of my very first handspun. It's 100% merino 2-ply, with one white ply and one green/teal ply, and varies between chunky and super chunky weight. One mitten is very definitely bigger than the other, so next time I plan to work the starting chain and join for working in the round for both mittens before I work the cuff of the first one, to help with consistency. 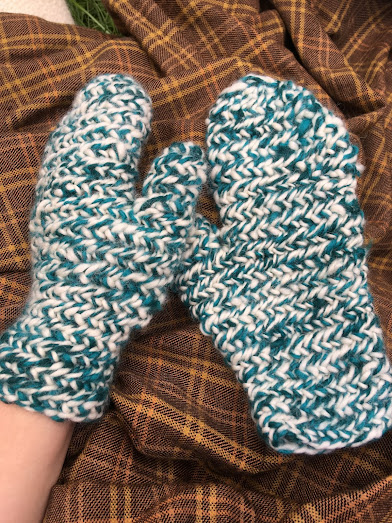