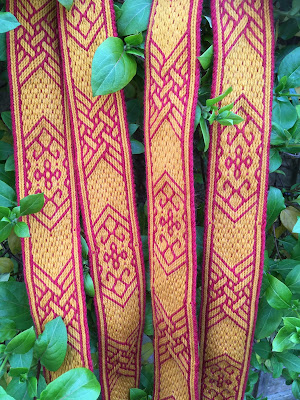 When I was a beginner, all the way back in 2006, the very first band I tried to weave was based on one of the finds from a Viking cemetery in Birka, Sweden, dated to the 8th to 10th century. It's a lovely draft, but for me it was a tale of disaster from start to finish. I made pretty much every mistake there is and very nearly gave up on the whole thing. Several days later, I warped eight tablets for a simple four turns forward, four turns backward band and the rest is history. I'm not saying that you shouldn't try it as a beginner, but it would be helpful to have some muscle memory for turning the tablets before you tackle it.

I've been thinking about the draft again recently, as it turns up on Instagram pretty often, and I thought it would be fun to go back to the original source and take a look at the find that it's based on. Historiska Museet, Sweden, have kindly made many of the reports about the Birka digs available online as free pdf downloads. The textile finds are covered in Birka III - Die Textilfunde Aus den Grabern[1], with chapter VII "Bänder: Ein broschiertes Band — ein echtes Gewebe" (from page 75 onwards) discussing the tablet woven bands. The reports are in German, but copying and pasting sections into Google translate will produce something somewhat comprehensible.

The Carolyn Priest-Dorman draft[2] is based on a section from band B22, a label that Geijer uses for several similar finds, from graves 731, 750 and 824. The fragments from graves 731 and 750 were poorly preserved, but showed use of both gold and silver brocade wefts, like the better preserved example from grave 824 (detailed notes for the three bands are given on page 88 of Birka III - Die Textilfunde Aus den Grabern). Geijer describes the B22 band from grave 824 as having been woven with at least 29 tablets, with borders that needed a probable 6 tablets on each side (only the threads from 4 tablets on each side actually survive). The tablets were all threaded in the same direction and there were no turning reversals visible on the back of the band. She theorises that as the back of the band appears roughly woven and is rather unattractive, the band would originally have been sewn onto another fabric, leaving only the brocaded side visible. The band itself is 1.2cm wide and 9.5cm long and has around 20-25 brocade wefts per cm, with the gold weft at a greater density that the silver weft, perhaps because the gold was softer and easier to beat into place than the silver.

Several photographs of the B22 band (edited to remove a photo of a different band from the bottom right corner). Image from Geijer (1938) Birka III - Die Textilfunde Aus den Grabern, Plate 23

A schematic diagram of the motifs from the B22 band. Image from Geijer (1938) Birka III - Die Textilfunde Aus den Grabern Figure 20, page 83. I believe that the smaller section at the bottom is what Carolyn Priest-Dorman based her draft on. I chose to base my draft on the longer of the two sections

I freely admit that I don't enjoy weaving brocade, so I converted the motifs into 3x1 diagonals instead when I designed my version of the B22 find. I chose a yellow background colour to mimic the areas of the original that were covered by the gold brocade weft and "stave" borders for the selvedges, which are a fairly common feature of such bands[3]. I used red as my motif line and weft colour, as I liked the contrast between it and the yellow and the little spots of the red weft that show through in the large yellow sections mimic the brocade weft tie-down points of the original. I also chose to weave it in King Cole Merino Blend 4-ply (in mustard and scarlet) instead of the silk[4] of the original, as that was what I had to hand in the colours I wanted. This means that my band is 4.3cm wide, rather than the original 1.2cm.

I have designed the band to be twist-neutral for the pattern tablets (you will get a build-up of twist behind the four selvedge tablets on each side of the draft), so the pattern repeat is pretty long to incorporate a lattice section that twines in the opposite direction. I've split the draft itself into two pieces to make them easier to work from, in such a way that you can weave from just one of them without breaking the motifs, if you prefer. You can view them at their full size by clicking on the draft to select it, then right-clicking on it and selecting "open image in new tab", click on it one more time in the new tab and it should be much bigger.

As the turning diagram for this draft is over 200 picks long, I've chosen not to include the text description in this post. Instead, you can download it by clicking here.

[4] Ostrom Peters, C. (2002). The Silk Road Textiles at Birka: An Examination of the Tabletwoven Bands, The Textile Society of America Symposium Proceedings, Retrieved from:  https://digitalcommons.unl.edu/cgi/viewcontent.cgi?referer=https://www.google.com/&httpsredir=1&article=1407&context=tsaconf (17/05/2021)

Posted by Catherine at June 07, 2021
Email ThisBlogThis!Share to TwitterShare to FacebookShare to Pinterest