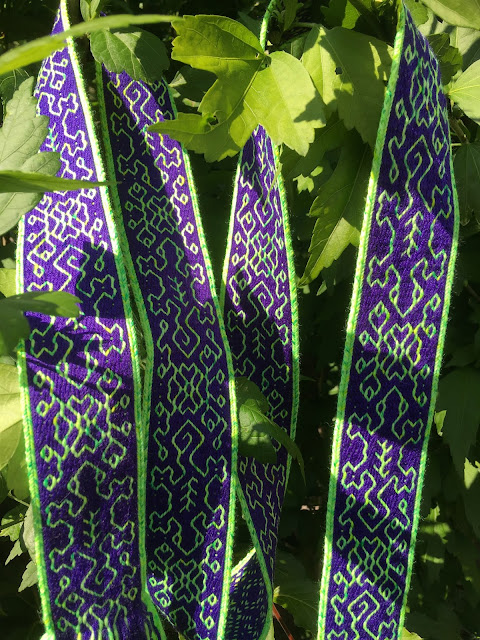 When I was planning this band, I wanted to play around with some things I don't normally do, namely an asymmetrical animal motif, woven with a light motif line on a dark background, rather than the other way around. I also had some new yarn I was excited to try out.

The yarns I used for this band are from Mothy and the Squid in the colourways Intense Iris and Lime Sorbet, both in her platinum merino/nylon blend sock yarn base. I really enjoyed weaving with this yarn and have plans to use it again in the future. It's really soft to the touch, which made me a little worried, as I've had trouble with soft yarns fraying and falling apart during weaving in the past, but it stood up to the friction of tablet weaving really well. Not a single damaged thread. I suspect this is partly because of the nylon in the blend, partly because of the high twist and number of plies, and partly because it's just a high quality yarn. Another thing that impressed me was that it didn't bleed in the slightest when I soaked it overnight as part of wet finishing. The Intense Iris is so saturated and, well, intense that I was expecting a little bleeding, but there wasn't even a hint. I also have two skeins of the Mothy and the Squid luxury merino/silk/cashmere blend base (which I had to put away in a drawer because I couldn't stop stroking them), but I wouldn't recommend them for tablet weaving. They're softly spun to highlight the fibres and improve the drape and there would be too much friction on them as the threads move past each other. I'm planning to use the two of them for a colour work knitted cowl some time in the future.

I have cut the Gecko draft into two pieces, as it's pretty big. Apart from the selvedge tablets, it's twist-neutral (each tablet performs the an equal number of forward and backward turns), so you won't get a build up of twist behind the pattern tablets. 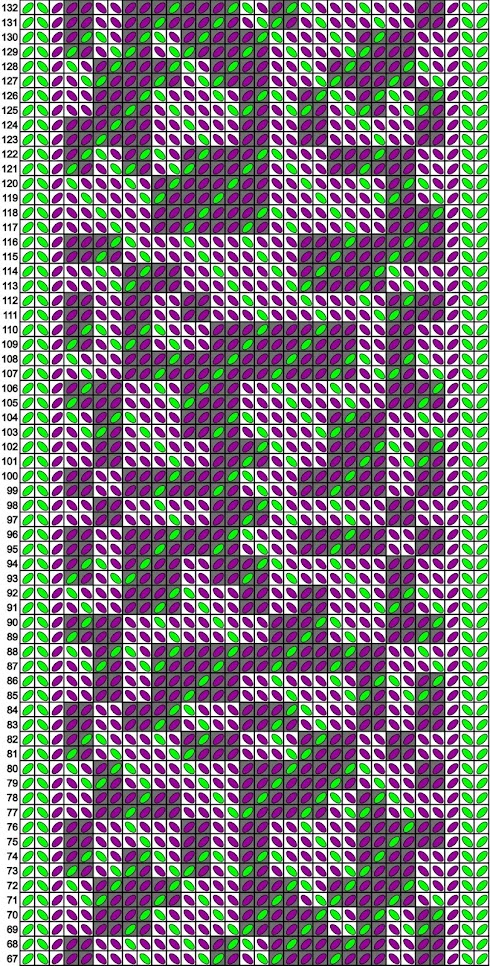 You can download the TDD file for Gecko by clicking here.

You can download the text description for Gecko by clicking here.