If you are unhappy with your band or you want to correct a mistake, you can turn the tablets in the opposite direction to the way you turned them during weaving to unweave your work, taking the weft out of the shed as you go. If you need to go back more than a few picks, you might want to consider stripping out the weft to make this process easier.

In this example, I was testing out some of the letter drafts that would one day be part of my book Tablet Weaving in Theory and Practice: Double-Face Inscriptions. I decided that my majuscule (capital) X looked far too much like someone with antennae running for a bus. Rather than continuing, I stripped out the weft so that I could re-use that section of warp and try out another version of the letter instead. Pull the warp threads apart to the side, towards the selvedges to expose the weft. Snip it with a pair of scissors (being very careful not to nick any warps!) to a point a few picks above where you want to restart your band.

Pull out each piece of weft with your fingers or a pair of tweezers. 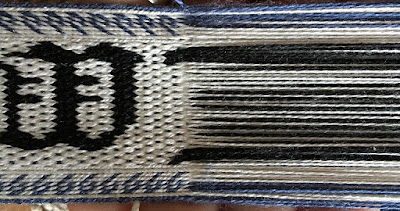 Turn the tablets until the twist is gone between them and the final piece of weft in the shed just above where you plan to restart. 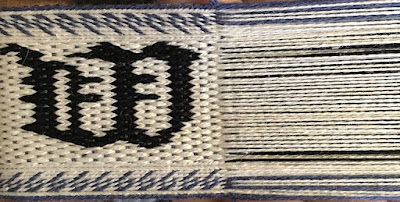 Unweave the final few picks by turning the tablets in the opposite direction to the way you turned them when you wove that section. Carefully remove the weft from the shed each time it is exposed and the shed is open. This will give you a short section of weft attached to the band. 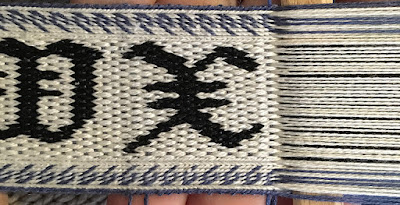 Join a new weft by placing it into the shed with a short tail sticking out of the band, then turn the tablets according to your draft and place the old weft tail through the shed alongside the new weft to lock it in place. Weave with the new weft and the old weft tail in the shed together for a pick or two, then continue on with only the new weft. Trim away the tails of the new and old wefts to neaten up the band.

Posted by Catherine at February 26, 2021
Email ThisBlogThis!Share to TwitterShare to FacebookShare to Pinterest