This update was inspired by Github user @jenniferalons, who came up with the idea for and wrote the code needed to add a function to TDD that would show several repeats of the draft making it easier to visualise what a band will look like, without having to do it manually within the draft. The pattern repeats will appear on the screen to the right of drafts or below them if there isn't enough space.

We've added to this great idea by making it possible to turn pattern repeats on and off, to specify how many repeats and to allow the user to decide how much of the draft to repeat (there are some patterns where a few set up picks are needed before the pattern can start). We've also made it so that you can save pattern repeats as well as drafts as picture files. 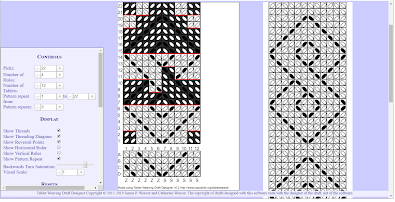 Thank you @jenniferalons!
Posted by Catherine at December 29, 2019
Email ThisBlogThis!Share to TwitterShare to FacebookShare to Pinterest