Every year Drachenwald holds a series of competitions throughout the year to choose the next Kingdom Artisan. There are a total of four competitions, each with an individual winner (plus two special categories for our younger members), where contestants can collect points towards the position of Kingdom Artisan. 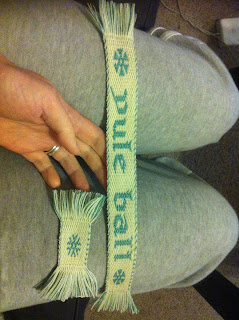 Last year (2012) at Flintheath's Yule Ball I gave away two prizes for the Arts and Sciences competition, one for the main winner and a smaller one for a promising beginner.
I used blue and white 18/2 wool yarns to match the event's theme colours and Linda Hendrickson's Textura Quadrata from her book "Please Weave a Message". I also used her flower motive, which I subsequently modified to resemble a snowflake. We had a lovely display of Arts and Sciences at Yule Ball and the main prize was won by Lady Jahanara Vivana, who happens to be the Minister for Arts and Sciences for Drachenwald. She asked if I'd make a similar prize for the first of the Kingdom Artisan competitions at Twelfth Night. Intrigued, inspired and excited, I agreed to make prizes for all four events, including mini ones for the special categories.
I made a 3m striped continuous warp on my Ashford Inkle loom in black, red and yellow (the Drachenwald colours) 18/2 wool and set to work.

For the first band I reused the modified snowflake motif I used for the Yule Ball prize, after a little further modification to centre it properly on the band.

For the second band I slightly modified a bird motif from Nancy Spies' book "Here Be Wyverns" to represent all of our migratory birds that return in spring.

For the third band I went back to Linda Hendrickson's flower motif and modified it slightly to centre it. This one is my personal favourite, but if I never weave another "M" I won't be sad.

For the final band I designed a sycamore leaf pattern to represent falling autumn leaves.

I used a technique called tablet woven double-face for all of the above prizes, giving some of the tablets a double turn between bands to reverse the background colours. I finished the ends of the bands by sewing the weft tail back along the path of the weft. I wove the prizes over the course of 6 days, which shows that once you get the hang of it double-face can be done fairly quickly and efficiently (or that I'm a crazy woman and need to do more work on pacing myself with things).
I source most of the wool for my tabletweaving from the Handweavers' Studio in London. 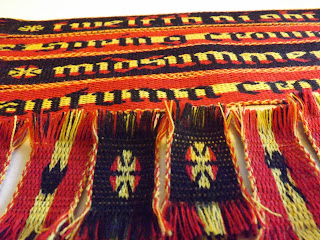 Posted by Catherine at January 01, 2013
Email ThisBlogThis!Share to TwitterShare to FacebookShare to Pinterest